Garland Russell Ball is the son of Ralph Elmer Ball.1 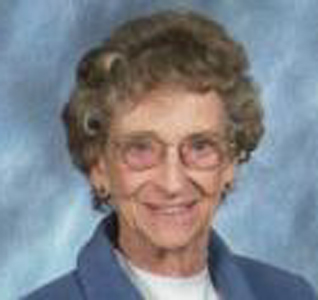 Martha Louise Jenks
b. 1925 DeKalb IL
d. 2010 Fresno CA
Martha Louise Jenks was born on 7 January 1925 at DeKalb, DeKalb Co., IL.2 She was the daughter of Ira Jonathan Jenks and Hattie Eilenberger.2 Martha Louise Jenks married Wilbur Perry Ball, son of Elmer Perry Ball and Henrietta Johanna Wendt, on 7 August 1948 at DeKalb, DeKalb Co., IL.1 Martha Louise Jenks died on 28 December 2010 at Fresno, Fresno Co., CA, at age 85.2 She was buried at Eaton Cemetery, Eaton, Weld Co., CO.3
As of 7 August 1948,her married name was Ball. Extracted from an obituary: Martha Louise Jenks Ball was born in DeKalb, Illinois, on January 7, 1925. She was the only daughter of Ira Jonathan Jenks, a Chemistry Professor at the Northern Illinois State Teacher's College (NISTC) in DeKalb, and Hattie Eilenberger Jenks. Martha was blessed with a happy childhood growing up in DeKalb with her older brother Herbert, younger brother Warren, and a family German Shepherd/police dog named Sandy. Martha's happy childhood came to an end with the loss of her father to a brain tumor in February 1945.
Martha resolved to continue with the rest of her life by completing her undergraduate degree in Home Economics at NISTC (now Northern Illinois University - NIU) in 1946. She then taught home economics at Minooka High School in Minooka, Illinois (1946-1947) and at Belvedere High School in Belvedere, Illinois (1947-1948). She also chose to begin a master's degree in Home Economics at the Colorado A&M College in Fort Collins (now Colorado State University - CSU) along with a number of Illinois teachers during the summer of 1947. Martha met her future husband, Sgt. Wilbur P. Ball, a U.S. Army veteran who had been injured in the Philippines in April 1945 and who was completing an undergraduate degree in Agriculture Education, on a blind date at the end of the summer. Martha and Wilbur were married in the Congregational Church of DeKalb on August 8, 1948, after a year-long courtship that was conducted largely by correspondence. Martha later said that he won her over through his letters, his plans for the future, and his Christian faith.
Martha and Wilbur began their married life together teaching home economics and agriculture, respectively, at Fleming High School in Fleming, Colorado (1948-1950). They later moved to Berthoud, Colorado, where Wilbur taught agriculture at the Berthoud High School (1950-1953) and completed a master's degree program in Agriculture Education at Colorado A&M College in Ft. Collins. Their first son, David L. Ball, was born in Longmont, Colorado and their second son, Perry E. Ball, was born in Loveland, Colorado. Martha and Wilbur moved again to Ames, Iowa where Wilbur completed a PhD in Agricultural Engineering in (1953-1956). This was followed by a two-year assignment with the U.S. Agency for International Development (USAID) and Stanford University at the Central Luzon Agricultural College (1956-1958), which was located near the town where Wilbur was injured in 1945.
Martha and Wilbur returned to the U.S. in 1958 when Wilbur accepted an Assistant Professor position at the University of California at Fresno (CSUF). Their third son, Jon N. Ball, was born in Fresno. Martha and Wilbur bought a family cabin at Hume Lake, California in 1960 where Martha and their three sons spent many happy summers swimming, boating and hiking in the mountains. With the exception of a two-year assignment with the USAID and CSUF at the Agricultural College in Bakh-er-Ruda, the Sudan (1961-1963), Martha and Wilbur lived in the Fresno area until Wilbur retired from CSUF in 1983. Martha completed her master's degree in Home Economics at CSUF and taught as a substitute teacher of home economics at local high schools during this period.
Martha and Wilbur chose to return to Colorado after his retirement and they purposely built their retirement home across the street from the Evangelical Free Church in Eaton, Colorado. Their intention was to always be able to participate in the life of the church even when they were too old to drive. They spent the next 15 years in Eaton while Wilbur wrote books on the history of Northeastern Colorado and worked as a voluntary consultant for agricultural missions in developing countries. Martha accompanied Wilbur on many of his travels and together they visited over 100 countries.
Martha is survived by her younger brother, Warren E. Jenks and his wife Dori of Carlsbad, California; her three sons, David L. Ball and his wife Barbara of Reedley, California, Perry E. Ball and his wife Cornelia of Abuja, Nigeria, and Jon N. Ball and his wife Debbi of Clovis, California; nine grandchildren; and seven great-grandchildren.2      Photo courtesy of Moser Funeral & Crmation Service of Evans CO.2

Beth Marie Pate is the daughter of Joseph Pate and Mary Elizabeth Ball.1

Joy Jean Pate is the daughter of Joseph Pate and Mary Elizabeth Ball.1

Linda Jan Ball is the daughter of Leon Robert Ball and Janis Wallerstedt.1