Grace Victoria Hubbard is the daughter of Ed Hubbard and Dora Olson.1 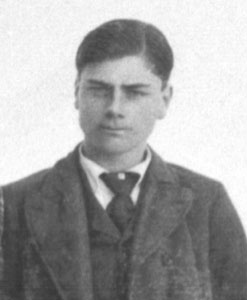 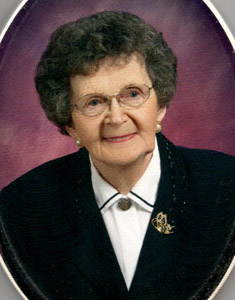 Grace G. Vitha
b. 1917 Jackson MN
d. 2013 Waconia MN
Grace G. Vitha was born on 15 November 1917 at Jackson, Jackson Co., MN.1,3 She was the daughter of Albert Vitha and Anna Kalash.3 Grace G. Vitha married Virgil Eugene Ball, son of John Courtland Ball and Katherine Ruth Michael, on 29 November 1939 at Nashua, Chickasaw Co., IA.3 Grace G. Vitha died on 23 January 2013 at Waconia, Carver Co., MN, at age 95.3 She was buried at Riverside Cemetery, Jackson, Jackson Co., MN.3
From an obituary: GRACE BALL, 95, of Delano, formerly of Jackson, passed away on Wednesday, January 23, 2013 at the Ridgeview Medical Center in Waconia, MN. GRACE BALL was born on November 15, 1917 in Jackson, Minnesota, the daughter of Albert and Anna (Kalash) Vitha. She attended country school in Hunter Township at District #65. After her graduation, she helped on the family farm and did housework for families. On November 29, 1939, she was united in marriage to Virgil “Bud” Ball at the Little Brown Church in Nashua, Iowa. They farmed in Middletown Township until their retirement in 1983, when they moved into Jackson. Bud passed away on March 23, 2001. Grace continued to make her home in Jackson; she then became a resident of the Jackson Pines until she moved to the Legacy Assisted Living in Delano, Minnesota. She passed away peacefully from complications of a broken hip in Waconia, Minnesota on Wednesday, January 23, 2013 at the age of 95 years.
Grace was a member of the United Methodist Church in Jackson, where she had been a member of the Faith Circle. She had been a member of the Middletown Get-Together Club for 50 years. She had been a member of the VFW Auxiliary. She had an extensive collection of bells and dolls, which she had acquired from her many trips and family and friends. She loved to play cards and dance. She enjoyed spending time in her flower gardens and traveling. She particularly enjoyed being surrounded by her grandchildren. Grace is survived by her four children, Dennis (Sharon) Ball of Savage, Douglas (Sally) Ball of Bloomington, Gary (Bea) Ball of Delano and Doryne Wendel of Boise, Idaho; 11 grandchildren, Scott, Lisa, Shane, Jennifer, Jon, Charles, Dana, Angie, Kevin, Mike, and Amy; 27 great-grandchildren; one great-great-granddaughter, Savannah Ball; a sister-in-law, Dortha King and many nieces and nephews. Grace was preceded in death by her parents, her husband of 61 years, 3 brothers, and her son-in-law, Roger Wendel.3      Photo courtesy of Osterberg Funeral Home.3 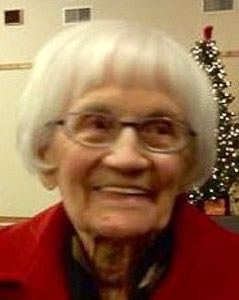 Dortha Arlene Ball
b. 1917 Wallingford IA
d. 2013 Champaign IL
Dortha Arlene Ball was born on 22 June 1917 at Wallingford, Emmet Co., IA.1 She was the daughter of John Courtland Ball and Katherine Ruth Michael. Dortha Arlene Ball married Wilbur Royce King, son of William Porter King and Marit Guldbrandsdatter Rovang, on 28 August 1941 at Lakefield, Jackson Co., MN.2 Dortha Arlene Ball died on 11 April 2013 at Champaign, Champaign Co., IL, at age 95.2
Dortha Arlene Ball also went by the name of Nonnie.2 From an obituary: Dortha A. King, 95, of Champaign, IL and formerly of Mankato, went home with her Savior on Thursday, April 11, 2013, at her home in Champaign, surrounded and held by family. Dortha, affectionately called Nonnie, was born in Gruver, Iowa, on June 22, 1917 to John C. and Catherine Ruth Ball. She graduated from Gruver High School and National Business Training College of Sioux City, Iowa and worked as Selective Service office manager at the Jackson County Courthouse, Jackson, Minnesota. On St. Patricks Day, 1941, she met Wilbur "Bill" R. King, and they were married August 28, 1941 at Lakefield, Minnesota on Bills birthday. Their children, Dee Ann and Craig, were born in Jackson and then the family moved to Mankato Minnesota. Dortha is survived by her daughter, Dee A. Chesser, Champaign, her son, Craig J. King, Honolulu, Hawaii, her grandson, Jamie (Amy) Chesser, Champaign and granddaughter Heidi (Jim) Lilley, Champaign, and her great-grandchildren Emma Lilley, Colin Chesser, Cole Lilley, Laura Chesser, Charlotte Chesser and McClaren Chesser, many nieces and nephews and their families and multiple friends of all ages. Dortha was preceded in death by her parents and husband, Wilbur.2      Photo courtesy of Mankato Mortuary.2

Myrtie Norma Miller was born circa 1908 at OK. She married Harold Montgomery Ross, son of William Montgomery Ross and Helen Josephine Ball, circa 1927.1