Wendell Akers is the son of Dwight Akers and Adelia Estella Crees.1

Thomas McConnell was born circa 1917 at IA.1 He was the son of Alva McConnell and Sylvia Esther Davidson.2

Creed Max Bland was born on 9 August 1924 at IA.2,3 He was the son of Orville Cleveland Bland and Sylvia Esther Davidson.1 Creed Max Bland died in March 1985 at Ozawkie, Jefferson Co., KS, at age 60.3 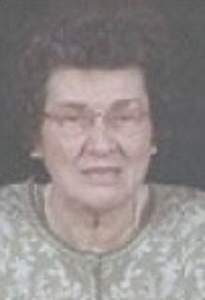 Doloris Nadine Bland
b. 1929 Robinson KS
d. 2009 Ottawa KS
Doloris Nadine Bland was born on 23 June 1929 at Robinson, Brown Co., KS.2 She was the daughter of Orville Cleveland Bland and Sylvia Esther Davidson.3 Doloris Nadine Bland married Burt Amos Robson.2 Doloris Nadine Bland died on 23 February 2009 at Ottawa, Franklin Co., KS, at age 79.2
Her married name was Robson.2 As of 10 September 1955,her married name was Smith.2 From an obituary: Doloris Nadine (Bland) Robson Smith, age 79, of Ottawa, Kan., massed away Monday, Feb. 23, 2009 at the Ottawa Retirement Village. She was born June 23, 1929 in Robinson, Kan. She attended elementary school and two years of high school in Robinson before moving to Topeka, Kan., where she graduated from the Topeka High School in 1947.
She married Burt Amos Robson, an Army Officer who lost his life in the Korean War. To this union was born a daughter, Jane Ann Robson. She married Floyd Franklin Smith on Sept. 10, 1955, in Topeka, Kan. The couple had two sons, Mark Edward Smith and Brian Frank Smith. In the 1940s, she worked for Hallmark Cards in Topeka. The next 25 years she was a full-time mother, wife, and homemaker. In the 1970s, she worked at the Clinic Pharmacy and later was deputy register of deeds in the Franklin County Courthouse for nine years. In more recent years, she was employed by the Haley Abstract Company and Croucher Abstract Company.
Doloris loved life and her bridge-playing friends, but most of all she loved her family. She like nothing better than to bake some brownies to serve to her grandchildren when they visited. She was a Franklin County Cancer Foundation volunteer and earlier, a Cub Scout den mother.
She is survived by her husband, Floyd Smith of Ottawa, Kan; a daughter, Jane Ann Chako and her husband, Andrew, of Bar Nunn, Wy; two sons, Mark Edward Smith and wife, Wanda, of Ottawa, Kan., and Brian Frank Smith and wife, Nancy, of Shawnee Mission, Kan; a sister, Alice McMurdo, of Topeka, Kan; five grandchildren, Casey Max Cole and his wife, Tracey, Tyler Anthony Smith and his wife, Michelle, Sarah Jean Smith, Dane Frank Smith and Rory Manning Smith; and two great-grandchildren, Corey Burgoon and Riley Mae Cole. Mrs. Smith was preceded in death by her parents; two brothers, Creed Max Bland and Tom McConnell.2      Photo courtesy of Teresa Kiser.

Elias Henley was born circa 1834 at IN.1 He was the son of John Henley and Phoebe Jane Noe.1

Henry Henley was born circa 1836 at IN.1 He was the son of John Henley and Phoebe Jane Noe.1

Ruth A. Henley was born circa 1838 at IN.1 She was the daughter of John Henley and Phoebe Jane Noe.1

Phebe J. Henley was born circa 1840 at IN.1 She was the daughter of John Henley and Phoebe Jane Noe.1

Thomas J. Henley was born circa 1843 at IN.1 He was the son of John Henley and Phoebe Jane Noe.1

Fred Bright was born circa 1898 at IA.2 He married Margaret Davidson, daughter of Joseph H. Davidson and Mary Jane Crees, circa 1922.1,2

Darwin Bright was born circa 1923.1 He was the son of Fred Bright and Margaret Davidson.1 Darwin Bright died in 1923.1

Mary Lou Bright is the daughter of Fred Bright and Margaret Davidson.1

Joan B. Bright is the daughter of Fred Bright and Margaret Davidson.1