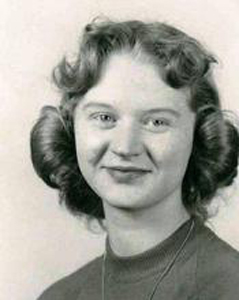 Judith A. Ball
b. 1940 Rushville IN
d. 2011 Rushville IN
Judith A. Ball was born on 21 September 1940 at Rushville, Rush Co., IN.1 She was the daughter of Robert Raymond Ball and Cloe Agnes Foster.1 Judith A. Ball died on 18 July 2011 at Rushville, Rush Co., IN, at age 70.1 She was buried at Orange North Cemetery, Orange, Fayette Co., IN.2
From an obituary: Judith A. Hill age 70, of Rushville, formally of Anderson, passed away July 18, 2011 in the presence of family, at Kindred Hospital South in Greenwood. She graduated from Rushville High School in 1958 and then wed the love of her life, Lynn R. Hill on September 10, 1958 and he survives. They were married nearly 53 years. She was born in Rushville September 21, 1940 the third child of the late Robert and Cloe (Foster) Ball. Judith worked many years as a pharmacy technician and enjoyed collecting coins for many years. Also of great comfort were the audio books she enjoyed.
In addition to her husband Lynn, she is survived by one son Robert (Kathryn) Hill of South Carolina; two sisters Ellen (Charles) Rogers of Rushville, and Linda Alford of Shelbyville. Many nieces and nephews also survive. Gone before her in death were her parents, one son Brian and brothers Jack, Bill and Ralph.2      Photo courtesy of Kathy Lindley.2

Children of Judith A. Ball and Lynn R. Hill

Colleen Ball is the daughter of Lowell Eugene Ball and Deloris May Walker.1

Jennifer Ball is the daughter of Lowell Eugene Ball and Deloris May Walker.1

Michael Ball is the son of Lowell Eugene Ball and Deloris May Walker.1

Children of Lynn R. Hill and Judith A. Ball

Ralph Ball is the son of Robert Raymond Ball and Cloe Agnes Foster.1

Robert Hill is the son of Lynn R. Hill and Judith A. Ball.1