Cordelia Perry was born circa 1832 at Putney, Windham Co., VT.2 She was the daughter of Ebenezer Perry and Lydia (????)2 Cordelia Perry married Palmer C. Scott, son of Joseph Scott and Joanna H. Ball, on 15 January 1853 at Newton, Middlesex Co., MA.2

Flora A. Scott was born circa 1855 at VT.1 She was the daughter of Palmer C. Scott and Cordelia Perry.1

Joseph Scott was the son of Palmer C. Scott and Cordelia Perry.1

Children of Lee Winfield Scott and Hattie May Lermond 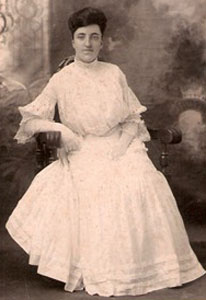 Children of Hattie May Lermond and Lee Winfield Scott

Rachel Lavina Scott
b. 1919 Bath ME
d. 2003 Bath ME
[photo circa 1994]
Rachel Lavina Scott was born on 13 March 1919 at Bath, Sagadahoc Co., ME.1 She was the daughter of Lee Winfield Scott and Hattie May Lermond.1 Rachel Lavina Scott married Edward Gray Waters, son of William Lawrence Waters and Etta Frances McCorrison, on 17 August 1941 at Bath, Sagadahoc Co., ME.1 Rachel Lavina Scott and Edward Gray Waters were divorced in September 1951 at Bath, Sagadahoc Co., ME.1 Rachel Lavina Scott died on 2 September 2003 at Bath, Sagadahoc Co., ME, at age 84.1
From an obituary: Rachel Lavina Waters, 84, of Pleasant Street, died Tuesday, Sept. 2, 2003, at Winship Green Nursing Center in Bath. She was born in Bath, March 13, 1919, a daughter of Lee W. and Hattie M. Lermond Scott and moved to Gardiner at a young age. In 1929, she moved back to Bath, attended Bath schools and graduated from Morse High School in 1939. On August 24, 1940, she married Edward G. Waters and they lived on Pleasant Street in Bath. She was a self-employed seamstress.
She was a member of Corliss Street Baptist church, where she was a member of the Pholathia class. She was a member of the West Bath Grange for more than 60 years. She enjoyed spending time with her family, grandchildren and friends; sewing; knitting; and her cat, Sandy. She was predeceased by her husband, Edward G. Waters, who died in 1964, and by a grandson, Richard "Ricky" Ditto, who died June 16, 1967. Survivors include two sons, David R. Waters Sr. and his wife, Nancy, of Bath, and Bruce L. Waters and his wife, Patricia, of Fort Myers, Fla; a daughter, Sheredith E. Wallace of Sebasco Estates, Phippsburg; a brother, Merriett Scott of Brunswick; seven grandchildren; and nine great-grandchildren.1      Photo courtesy of S. Wallace.1 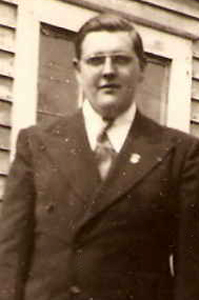 Edward Gray Waters
b. 1918 Bath ME
d. 1964 Boston MA
Edward Gray Waters was born on 29 May 1918 at Bath, Sagadahoc Co., ME.1 He was the son of William Lawrence Waters and Etta Frances McCorrison.1 Edward Gray Waters married Rachel Lavina Scott, daughter of Lee Winfield Scott and Hattie May Lermond, on 17 August 1941 at Bath, Sagadahoc Co., ME.1 Edward Gray Waters and Rachel Lavina Scott were divorced in September 1951 at Bath, Sagadahoc Co., ME.1 Edward Gray Waters died on 24 October 1964 at Boston, Suffolk Co., MA, at age 46.1
From an obituary: Edward Gray Waters, 47, of Nashua, N.H., a native of Bath, died Thrusday afternoon in a Boston hospital. He was born here, May 29, 1918, the son of William L. and Frances McCorison Waters. He attended Bath schools and graduated from Morse High School in the class of 1937. Following his schooling, Mr. Waters was employed for a time at Pratt & Whiney in Connecticut and during World War II he returned to Bath where he was emplyed in the pipe covering department of the Bath Iron Works Corp. Before taking up residence in Nashua, he lived in Virginia Beach, Va., for a brief period. He was an attendant of Grace Episcopal Church.
Surviving are his daughter, Mrs. John Ditto of Virginia Beach, Va., two sons, David and Bruce Waters of Bath; one sister, Mrs. Herbert Norton of Maynard, Mass; an aunt, Miss Mary Shaw of Bath and several coursins.1      Photo courtesy of S. Wallace.1