Briggs Ball was born circa 1815.1 He was the son of Briggs Ball and Hannah Ackerman.1 Briggs Ball died on 7 May 1816 at Milford, Hillsborough Co., NH.1

Mary Ball was born say 1817 at MA. She was the daughter of Thomas Ball and Elizabeth Wyer Hall.1 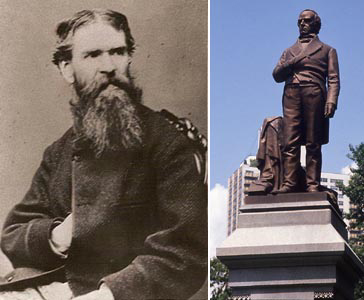 Thomas Ball
b. 1819 Charlestown MA
d. 1911 Montclair NJ
[photo of statue of Daniel Webster c2006]
Thomas Ball was born on 3 June 1819 at Charlestown, Suffolk Co., MA.2 He was the son of Thomas Ball and Elizabeth Wyer Hall.1 Thomas Ball married Ellen Louisa Wilde, daughter of Daniel W. Wilde, on 10 October 1854.2 Thomas Ball died on 11 December 1911 at Montclair, Essex Co., NJ, at age 92.3
After several odd jobs to help support his family he spent three years working at New England Museum entertaining the visitors by drawing portraits, playing the violin, and singing. He then became an apprentice for the museum wood-carver Abel Brown. He taught himself oil painting by copying prints and casts in the studio of the museum superintendent. As commissions started to come in he moved from studio to studio until finally settling in a studio in Tremont Row where he remained for twelve years. Here he painted several religious pictures and a portrait of Cornelia Wells (Walter) Richards, editor of the Boston Evening Transcript. He then turned his attention to sculpture, his earliest work being a bust of Jenny Lind.

At thirty-five he went to Florence for study. There, with an interval of work in Boston, Massachusetts, in 1857—1865, he remained for more than thirty years, being one of the artistic colony which included the Brownings and Hiram Powers. He returned to America in 1897, and lived in Montclair, New Jersey, with a studio in New York City. His work includes many early cabinet busts of musicians (he was an accomplished musician himself, and was the first in America to sing "Elijah"). In 1890 he published an autobiographical volume, "My Three Score Years and Ten", which was updated in 1900, and reprinted in 1993. Ball created the following sculptures:

Daniel Brown was born circa 1816 at Portland, Cumberland Co., ME.2,3 He married Elizabeth Ball, daughter of Thomas Ball and Elizabeth Wyer Hall, circa 1835.1 Daniel Brown died in 1902 at Marshfield, Plymouth Co., MA.4

John Warren Ball was the son of John Ball and Rebecca Warren.1

Buckminster Ball was the son of John Ball and Rebecca Warren.1

Abby Collins Ball was the daughter of John Ball and Rebecca Warren.1