Alfred Henry Ball was born on 11 May 1847 at NY.2 He was the son of Stephen Munn Ball and Lucinda Guild.1 Alfred Henry Ball married Caroline M. Taylor, daughter of John S. Taylor and Mary Jane Walters, circa 1866.3 Alfred Henry Ball died on 12 January 1932 at age 84.4 He was buried at Balltown Cemetery, Hanover, NY.5

Clarita Jerome was born on 15 April 1851 at Rochester, Monroe Co., NY.1 She was the daughter of Leonard Walter Jerome and Clarissa Hall.1 Clarita Jerome married Moreton Frewen circa 1881 at NY.2 Clarita Jerome died on 20 January 1935 at England at age 83.2 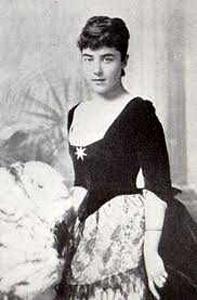 Children of Cordelia A. Snow and Leander Barrett Pryor

Children of Leander Barrett Pryor and Cordelia A. Snow 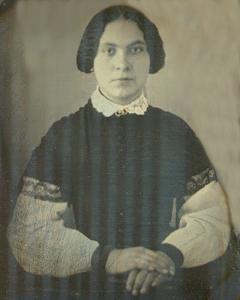 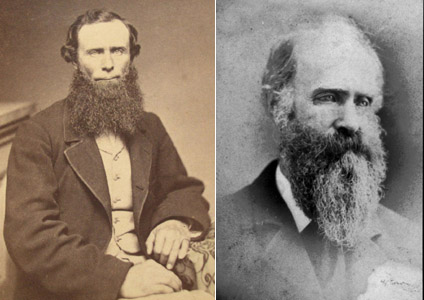 Daniel Buel Bills
b. 1830 near Fort Ticonderoga NY
d. 1914 Anamosa IA
[right photo circa 1900]
Daniel Buel Bills was born on 13 February 1830 at near Fort Ticonderoga, Essex Co., NY.1 He was the son of Chester Bills and Mary Day.2 Daniel Buel Bills married Mary Jane Ball, daughter of Stephen Munn Ball and Abigail S. Throop, on 21 March 1854 at Versailles, Cattaraugus Co., NY.2 Daniel Buel Bills married Emerancy Newcomb Howard on 24 March 1864.2 Daniel Buel Bills died on 18 July 1914 at Anamosa, Jones Co., IA, at age 84.1 He was buried at Riverside Cemetery, Anamosa, Jones Co., IA.1
At a few months of age in 1830, his parents moved from Essex County, NewYork to Vermont. Family legend says that on the move from New York to Vermont, Dan traveled on horse back in a side basket with the kitchen utensils in a basket on the other side. They led the horse and perhaps other live stock across the Green Mountains from New York to Vermont. When Dan was seven (1837) the family moved to from Vermont to Chautauqua County, New York. After Dan and Mary Jane Ball were married, they lived in Chautauqua County until 1860. Then they moved to Iowa. Note that he told his sons that his name was "Dan"; his older brother, who died at age 3, was Daniel.2 From and obituary: Dan Bills, son of Chester Bills and Mary Day, was born near Fort Ticonderoga, New York, Feb 13, 1830. He was next to the youngest in a family of nine children, four of who only lived to reach maturity and all of them preceded him in death. At a few months of age his parents moved to Vermont where they resided until his seventh year, when they moved to Chautauqua county, New York. He was married to Mary J. Ball, March 21, 1854 and made his home in Chautauqua County until 1860, when he came with his family to make his home in Iowa. To this union two children were bore, Frank E. of near Marshalltown and Fred A. of Anamosa. On December 9th 1862 death entered his home taking from him his young wife and leaving him with two young boys, one five months and the other 5 years of age. On March 24th, 1864, he was united in marriage to Emerancy Howard. To this union one child, a daughter, Carrie L., now Mrs. J. F. Waggoner of Jackson township, was born. He has resided in Jones county all of the time since coming to Iowa, with the exception of four years which he spent in Linn County. On March 31, 1912 his aged companion was taken from him by death, a blow from which he never recovered. From this time he made his home with his children until his death July 28th, 1914, aged 84 years, 5 months and 15 days. He leaves behind to mourn his departure three children and ten grandchildren.2      Photos courtesy of Gerald L. Bills.3

Child of Abner Vickery and Jerusha (????)

Child of Jerusha (????) and Abner Vickery