Edward C. Taylor was born circa 1896 at Washington, DC.1 He was the son of Augustus Taylor and Josephine M. Kübel.1

Frank A. Taylor was born circa 1902 at Washington, DC.1 He was the son of Augustus Taylor and Josephine M. Kübel.1

Elizabeth J. Taylor was born circa 1905 at Washington, DC.1 She was the daughter of Augustus Taylor and Josephine M. Kübel.1

Catherine B. Elliott was born circa 1901 at Washington, DC.1 She was the daughter of Robert M. Elliott and Edna Taylor.1

Child of Donato Balestrino and Anna May Roseberry 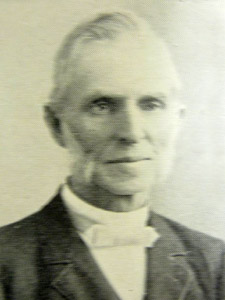 Isaac J. Ball
b. 1826 Elizabeth NJ
d. 1907 Terra Haute IN
Photograph by Picasa 3.0
Isaac J. Ball was born on 29 August 1826 at NJ.1 He was the son of Nelson S. Ball and Esther Hull.1 Isaac J. Ball married Caroline Taylor, daughter of William Taylor and Matilda (????), on 17 September 1850 at Terre Haute, Vigo Co., IN.1 Isaac J. Ball died on 2 September 1907 at Terre Haute, Vigo Co., IN, at age 81.1 He was buried at Highland Lawn Cemetery, Terre Haute, Vigo Co., IN.2
From an article in the "Terre Haute Tribune": Isaac Ball was a prominent Terre Haute businessman for 60 years. The son of Nelson and Esther (Hull) Ball was born near Elizabethtown, NJ on Aug. 29, 1826. In 1832 the Ball family moved to Ohio, where Isaac attended school, and then to Hagerstown, IN. At age 16, he became an apprentice cabinetmaker in nearby Cambridge City and gained experience fabricating wooden caskets. Seeking a place to establish his own business, Ball resided briefly in Dayton, Indianapolis and Lafayette before "discovering" Terre Haute in 1847. Noting that the town was situated on the Wabash River and the National Road and soon would be served by the Wabash & Erie Canal and the Terre Haute & Richmond Railroad, he decided to relocate. Though he initially specialized in making furniture of all kinds, Ball soon realized the local need for modern wood caskets. Before the Civil War, caskets usually were made to order. As time permitted Ball began to manufacture ready-made coffins and built a large barn behind his residence on N. Third St., north of Cherry St., for storage.
Eventually he abandoned the cabinet-making business to become an undertaker and to specialize in casket manufacturing. He is credited with introducing horse-drawn hearses to western Indiana. On Sep. 17, 1850, Isaac wed Caroline Taylor, daughter of William Taylor, a resident of Fort Harrison during the War of 1812. The couple had seven children but only two, Mathilda and Frank, survived childhood. The family resided at 220 Swan St. Early in the civil War Ball interred 11 confederate soldiers - who died while incarcerated at a makeshift prison established in a former Terre Haute pork packing plant - at Woodlawn Cemetery. On Nov. 24, 1864, Ball departed Terre Haute for Chattanooga, TN and Bridgeport, AL, to return the remains of battlefield victims Major John P. Dufficy, William A. Rogers, John Singhurse and John T. Cuppy to their home town. He was accompanied by James Boord, a relative of Dufficy. The pair's poignant and dramatic journey took nearly two months.
By 1880 Ball had earned a statewide reputation and was elected the first president of the Indiana funeral Directors Association. Daughter Mathilda Ball, known as "Tillie", married Emanuel Augustus Hess. Frank wed the former Norma Van Deuser and joined his father in the funeral home business before the turn of the century. Albert Hollingsworth, formerly of Indianapolis, joined the business as an embalmer in 1895. Soon after Isaac's death on Sep. 2, 1907, Frank relocated the Isaac Ball Funeral Home to 331 S. Third St., his former residence, and made Hollingsworth a partner. Caroline Ball passed away on Nov. 20, 1911. Hollingsworth and Frank Ball continued to manage Ball Funeral Home into the 1930's. In 1952, after W. Francis Porter acquired the business, the name was changed to the Ball-Porter Funeral Home.2      Photo courtesy of the Wabash Valley Genealogy Society Cemetery Committee.2

Child of Matilda (????) and William Taylor

Matilda E. Ball was born circa 1856 at IN.1 She was the daughter of Isaac J. Ball and Caroline Taylor.1

Caleb Ball was the son of Nelson S. Ball and Esther Hull.1

Child of William Taylor and Matilda (????)

Child of Anna May Roseberry and Donato Balestrino