Lyman Barrows was born on 22 May 1897 at Ironwood, Gogebic Co., MI.1 He was the son of Frank Lyman Barrows and Eulalie Augusta Bent.1

Helen Turner was the daughter of Sherman Turner and Abigail Angeline Ball.1

Children of Della A. Brown and Frank E. Bills

Pearl A. Bills was born in October 1887 at IA.3 She was the daughter of Frank E. Bills and Della A. Brown.1 Pearl A. Bills married Archibald Barrett.4
Her married name was Barrett.4

Iva Blanche Bills was born in September 1885 at IA.4 She was the daughter of Frank E. Bills and Della A. Brown.1 Iva Blanche Bills died in 1923.3 She was buried at Riverside Cemetery, Marshalltown, Marshall Co., IA.3

Children of Lloyd D. Bills and Emma A. Freedlund 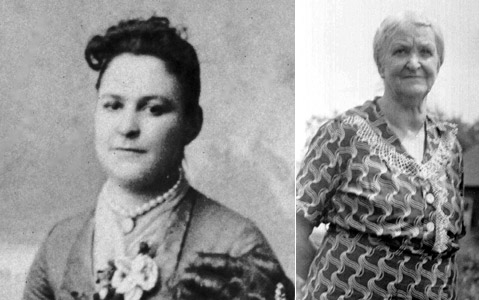 Sarah Jane French
b. 1866 Canton IA
d. 1950 Flint MI
Sarah Jane French was born on 9 August 1866 at Canton, Jones Co., IA.1 She was the daughter of Joseph French and Gracie Catherine Beaver.2 Sarah Jane French married Fred A. Bills, son of Daniel Buel Bills and Mary Jane Ball, on 16 January 1894 at Wyoming, Jones Co., IA.3 Sarah Jane French died on 24 June 1950 at Flint, Genesee Co., MI, at age 83.1 She was buried at Antioch Cemetery, west of Wyoming, Jones Co., IA.1
As of 16 January 1894,her married name was Bills. From an obituary: Funeral service for Sarah Jane Bills, 83, who died June 24 at Flint, Mich., was held from Presbyterian Church, Wyoming, Monday afternoon with Rev. F. E. Somerville officiating. Burial was in Antioch cemetery. Sarah Jane Bills was born Aug. 9, 1866 on a farm near Canton, the daughter of Joseph and Grace Beaver French, and died at the home of her son, Dillman, following a three day illness. On Jan. 16, 1894, she was married to Fred A. Bills. They made their home near Springville for eight years, then moved to a farm in Jackson township near Anamosa where they lived for 13 years. Following this they lived near City Point, Wis., for a few years but returned to Iowa because of Mr. Bills' health making their home in Wyoming until his death on July 13, 1928. Since then Mrs. Bills has made her home in Flint, Mich. Early in life Mrs. Bills became a member of the United Presbyterian Church. Later she united with the Presbyterian Church, maintaining her membership in the Wyoming church. Survivors are her daughter, Mrs. Raeburn Paulson, Flint, Mich., three sons, S. C. Bills, Fox Lake, Ill; Dillman F., Flint, Mich., and Edwin C., City Point, Wis. A daughter, Ruth, died in January, 1949. Other survivors are a sister-in-law, Mrs. Newton French, and a brother-in-law, J. J. Bender, both of Wyoming; 17 grandchildren, eighteen greatgrandchildren, and nieces and nephews.2      Photos courtesy of Gerald Bills.4

Children of Sarah Jane French and Fred A. Bills

(child) Ball was the child of Elijah Ball and Freelove Mitchell.1

Stephen Chester Bills was born on 18 May 1896 at Wyoming, Jones Co., IA.1 He was the son of Fred A. Bills and Sarah Jane French.1 Stephen Chester Bills married Ruth Lillian Grace Christophersen, daughter of Martinus Christophersen and Hulda Amalie Bjerke, on 27 June 1917 at Wisconsin Rapids, Wood Co., WI.2 Stephen Chester Bills and Ruth Lillian Grace Christophersen were divorced circa 1952.2 Stephen Chester Bills married Violet Cox in 1955 at Weslaco, Hidalgo Co., TX.2 Stephen Chester Bills died on 3 September 1978 at Weslaco, Hidalgo Co., TX, at age 82.1 He was buried at Weslaco Road Cemetery, Weslaco, Hidalgo Co., TX.1
He and Lillian moved to Flint in about 1917, shortly after they were married, to work in the new automobile factories. Steve became a foreman at Buick and also owed a gas stationin Flint. Harlow Curtice, former GM President, spent many an hour in Steve's garage experimenting with milled heads and new type spark plugs, carburetors, etc., when Curtice was the Buick General Manager. Steve worked on dynamometers at that time at Buick. As a reward for loyal service, and through the efforts of Harlow Curtis, he was rewarded with a Buick dealer franchise in Fox Lake, Illinois about 1948. It was called Lakeland Buick, an automobile dealership and Standard Oil gas station. Steve then moved to San Antonio and then to Weslaco Texas.2

(daughter) Ball was born between 1821 and 1825 at RI. She was the daughter of Elijah Ball and Freelove Mitchell.1

(daughter) Ball was born between 1811 and 1815 at RI. She was the daughter of Elijah Ball and Freelove Mitchell.1

(daughter) Ball was born between 1816 and 1820 at RI. She was the daughter of Elijah Ball and Freelove Mitchell.1

Edwin Glen Bills was born on 16 December 1903 at Jackson, Jones Co., IA.1 He was the son of Fred A. Bills and Sarah Jane French.1 Edwin Glen Bills married Clara Reshel, daughter of Peter Reshel and Mary (????), on 20 July 1932 at City Point, Jackson Co., WI.2 Edwin Glen Bills died on 4 February 1978 at Black River Falls, Jackson Co., WI, at age 74.1 He was buried at City Point Cemetery, Jackson Co., WI.1
He enlisted in the the Navy during WWI. However, he was only about 14 or 15 when he enlisted and was discharged when the Navy found out how old he was. After that he went back to the farm in City Point. Afterthe farm was sold (about 1922) he moved to Flint and lived with Esther and Ray Paulson. He got a job with Chevrolet. Then he moved back to City Point where he was in the cranberry and moss business. After he sold the City Point farm he lived in Texas and other places, finally settling in a home in Merrilan, Wisconsin.2

Ruth Eleanor Bills was born on 22 January 1908 at Jones Co., IA.1 She was the daughter of Fred A. Bills and Sarah Jane French.1 Ruth Eleanor Bills died on 30 January 1940 at Weiser, Washington Co., ID, at age 32.1,2 She was buried at Antioch Cemetery, Jones Co., IA.1
She received a B.S. from Michigan State University and went into teaching home economics and school administration.3

Ida Ball was born circa 1849 at NY.1 She was the daughter of Jonathan Ball and Martha L. Washborn.1

Myrtle Ball was born on 1 January 1866 at WI.1 She was the daughter of Alvin Billings Ball and Martha Adelaide Divinney.1 Myrtle Ball died before 1900.2