Fred Castle was born circa 1867 at PA.2 He was the son of Tom Castle and Almira Ball.1 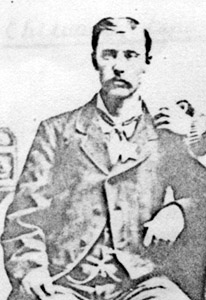 William Orville Ball
b. 1851 Susquehanna Co. PA
d. 1906 Black River Falls WI
William Orville Ball was born on 24 March 1851 at Susquehanna Co., PA.2 He was the son of Seth Stark Ball and Almira Catherine Wilsey.1,3 William Orville Ball married Celestia C. Hall, daughter of Joseph David Hall and Maria H. Pope, on 24 December 1870.4 William Orville Ball married Ida Carrie Livings, daughter of James Franklin Livings and Olive Adelia Millard, on 29 March 1884 at Black River Falls, Jackson Co., WI.2 William Orville Ball died on 25 September 1906 at Black River Falls, Jackson Co., WI, at age 55.2 He was buried at Riverside Cemetery, Black River Falls, Jackson Co., WI.2
From an obituary in the "Jackson County Journal": William O. Ball died at the home of his son Horace in this city, Monday evening, September 24. The funeral will be held from the Methodist Church today. Mr. Ball was born in the state of Pennsylvania on March 24, 1851. He came to Black River Falls with his parents in 1855 and it had since been his home. He learned the mason's trade and followed it from the time he was a young man. He was a good workman and had plenty of work in the proper season. He was first married to Celestia C. Hall who died in 1883. Five children born to them survived him; Mrs. Mabel Hopkins of Idaho; Mrs. Nellie Ball of Los Angeles, California; Horace W. of this city; Bert of Cataract, and Edwin of Melrose. He was married to Ida C. Wood in 1884. She survives him with six children born to them; Mrs. Stella Jacobs, Arthur, Frank, Olive, Theodore and Esther all of this city.5      Photo courtesy of Helen Neuman of Ellensburg WA.

Sarah Berfield Patterson was born circa 1815 at PA.2 She married Seth Stark Ball, son of Orville A. Ball and Mahala Shaw, on 9 December 1861 at Jackson Co., WI.1

Maud Ball was born circa 1878 at WI.1 She was the daughter of Lewis Walter Ball and Arletta S. Chandler.1

Elwin Arthur Farnsworth was born on 5 April 1928 at Edgeley, LaMoure Co., ND.1 He was the son of Elwin Harry Farnsworth and Mabel Lois Kime.1 Elwin Arthur Farnsworth died on 9 May 2005 at Bismarck, Burleigh Co., ND, at age 77.1 He was buried on 13 May 2005 at North Dakota Veterans' Cemetery, south of Mandan, Morton Co., ND.1
Elwin Arthur Farnsworth's given name at birth was Arthur Elwin Farnsworth (Arthur was his paternal grandfather, Elwin the name of his father). However, by the time he started school, he had transposed his given names to Elwin Arthur.1 From an obituary in the "Bismarck Tribune": Elwin Farnsworth, age 77, passed away in Bismarck on Monday, May 9, 2005 from the effects of cancer and Parkinson's Disease. Elwin was along-time resident of Bismarck, having permanently located there in1953. Elwin Arthur Farnsworth was born on April 5, 1928 on the family homestead located 3 miles southeast of Edgeley, LaMoure County, North Dakota. He was the third of five children born to Elwin Harry and Mabel Lois (Kime) Farnsworth. In his early years he attended country school. After losing their farm in the drought of the Dust Bowl, the family moved into the town of Edgeley in November 1937. Young Elwin completed school in Edgeley and worked on local farms and did house painting with his uncle Colonel Farnsworth.
Following his graduation from Edgeley High School in 1946, Elwin joined the US Army. During this tour of duty, he was part of the US occupation forces in Chinhae, Korea and served as a radio operator attached to the Headquarters Battery, 1st Field Artillery Battalion, 6th Infantry Division. He returned to North Dakota in 1948, where he went to work for the State Highway Department. As a member of the Army Reserve, he was mobilized when North Korea invaded South Korea in June 1950. Elwin ended up in the Seoul, South Korea Theater of Operations, serving as a Vertical Control Operator in the Artillery Headquarters Battery, 63rd Field Artillery Battalion, 24th Infantry Division. After a period of time in combat, Elwin was assigned to duty in Japan to help with refurbishment and training of replacement troops.
In July 1951 Elwin Farnsworth returned to North Dakota and resumed his construction work with the State Highway Department. While working on a construction project in northwestern North Dakota in the summer of 1952, Elwin met a young bookkeeper named Joyce M. Johnson at the Crosby home in which they were both boarding. Elwin and Joyce married in the Presbyterian Manse in Crosby, North Dakota on April 28, 1953. By the fall of 1953 they had moved to Bismarck, where they took up permanent residence. Until his retirement in 1990, Elwin worked with the North Dakota State Highway Department. During the 1950's and early 1960's Elwin was the project engineer for many highway construction projects around the state of North Dakota. Later he would be involved with design and engineering construction teams that reviewed and inspected highway projects throughout the state. His coworkers referred to him as "Sarge".
Elwin was a scholar of Roman and military history. He was a long-time Green Bay Packer fan. Elwin took up vegetable gardening with a passion in 1963, a hobby which he pursued until shortly before his death. He added rose gardening to his repertoire in 1970, and cultivated 55 beautiful hybrid tea rose bushes at his home at 1506 N 15th Street. He took great pride in all his children and grandchildren. Elwin Farnsworth is survived by his dear wife Joyce; children Diane (Milton) Rue, David (Arlene) Farnsworth, Julee (Dean) Ritz, James (Kirsten) Farnsworth, and Richard (Michelle) Farnsworth, all of Bismarck, and Janelle (Todd) Crowley of Janesville, Wisconsin; 16 grandchildren and one great-grandson; an older sister Mabel Bagley of Belgrade, Minnesota, and his old cat Henry. He was preceded in death by his parents and siblings Shirley Farnsworth, Lillian Turney, and Gerald Farnsworth. Elwin Farnsworth will be greatly missed. Funeral services will be held at 10:30 AM Friday, May 13 at the Parkway Funeral Home in Bismarck. Burial will be at 2 PM Friday in the North Dakota Veterans' Cemetery located south of Mandan, North Dakota.1

Elwin Harry Farnsworth was born on 22 April 1891 at Hamilton, Mower Co., MN.1 He was the son of Marshall L. Farnsworth and Mary Edith Payne.1 Elwin Harry Farnsworth married Mabel Lois Kime, daughter of Arthur George Kime and Anna Blanche Brooker, on 22 May 1917 at Methodist Parsonage, Edgeley, LaMoure Co., ND.1 Elwin Harry Farnsworth died on 17 January 1952 at Trinity Hospital, Jamestown, Stutsman Co., ND, at age 60.1 He was buried on 21 January 1952 at Mt. Hope Cemetery, Edgeley, LaMoure Co., ND.1
From an obituary in "The Edgeley Mail": Funeral services were held at ten o'clock Monday morning for Elwin H. Farnsworth, 60, who died in Trinity hospital Thursday evening following a stroke suffered at noon. Father Joseph Hylden had charge of the services at the Church of the Transfiguration. 'Pallbearers were S. G. Nagel, V. W. Conley, C. W. Ward, Alvin Hehr, Samuel Mammel, and Anthony Lagodinski. Holte Funeral Home had charge of arrangements.
Mr. Farnsworth was around as usual on Thursday forenoon. Shortly after noon he suffered a stroke and was taken to Jamestown by the Holte Ambulance. Elwin H. Farnsworth was born to Marshall L. and Mary Payne Farnsworth April 22, 1891 at Hamilton, Minn. He came to the Edgeley community in 1902. He was married to Mabel Kime at Edgeley May 22, 1917. After farming for some twenty years he made his home in town. He was of the Catholic faith and a member of the KC. Surviving him are his wife; four children, Mrs. Lawrence Bagley of Regal, Minn., Elwin A. of Bismarck, Mrs. V. R. Turney and Gerald of Edgeley; three brothers, Colonel of Edgeley, Edgar of Cocoa, Fla., and Herbert of Spring Valley, Minn; one sister, Mrs. Nellie Woods of Rochester, Minn; and three grandchildren. Here for the funeral from a distance were Mr. and Mrs. Lawrence Bagley and Mrs. Bessie, all of Regal, Minn., and Elwin A. Farnsworth, Bismarck.1

Mabel Margaret Farnsworth was born on 18 March 1918 at Edgeley, LaMoure Co., ND.1 She was the daughter of Elwin Harry Farnsworth and Mabel Lois Kime.1 Mabel Margaret Farnsworth married Lawrence Joseph Bagley, son of Lewis L. Bagley and Anna K. Weber, on 30 June 1936 at Catholic Church in Edgeley, LaMoure Co., ND.1 Mabel Margaret Farnsworth died on 5 March 2008 at Belgrade Nursing Home, Belgrade, Stearns Co., MN, at age 89.1 She was buried on 10 March 2008 at St. Anthony's Catholic Cemetery, Regal, Kandiyohi Co., MN.1
From an obituary from the website of the Daniel-Anderson Funeral Home in Paynesville, Minnesota: Mass of Christian Burial will be 11 a.m. on Monday, March 10, 2008 at St. Louis Catholic Church in Paynesville for Margaret Bagley, age 89, of Regal, who passed away March 5, 2008 at the Belgrade Nursing Home in Belgrade. Burial will take place in St. Anthony's Parish Cemetery in Regal. Margaret was born March 19, 1918 in Edgeley, N. D. to Elwin and Mabel Lois (Kime) Farnsworth. She married Lawrence Bagley in Edgeley, N.D. on June 30, 1936. They moved to the Regal area where they farmed until retiring in 1962. During their retirement, they would winter in Lake Placid, Florida for the next 36 years. She was a former member of St. Anthony's Catholic Church and Alter Society in Regal. Margaret loved gardening, fishing, cooking and especially flowers. Margaret is survived by her daughters Pauline (Jim) Bower of Boerne, TX and Carol (Larry) Jones of Regal, nine grandchildren: Kathy Mullens, John Hedtke, Rodney Hedtke, Kristal Hicks, Jason Hedtke, Joan Rice, Patsy Bower, Sandra Linscott and James Bower, Jr., and 17 great grandchildren. Preceding Margaret in death are her parents, husband (2004), two infant grandchildren, sister Lillian Turney and brothers Elwin and Gerald Farnsworth.1