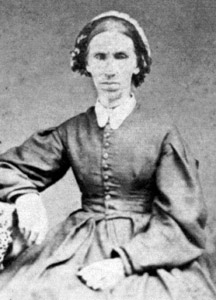 George Washington Ball was born on 13 December 1842 at VT; Comment by DGB: There are several conflicting sources for this birth date. The 1900 census lists "Jan 1843". His death record states "13 Dec 1840", noting that other data on that record is in error. The other censuses between 1850 and 1910 all suggest 1842 or 1843. Thus 13 Dec 1842 is the best guess amalgamation of these sources. End of comment. He was the son of John Ball and Charlotte Smith.2 George Washington Ball married Emma T. Thorp on 13 December 1868 at Dodge Co., WI.3 George Washington Ball died on 18 January 1916 at Norrie, Marathon Co., WI, at age 73.1 He was buried at Forest Cemetery, Birnamwood, Shawano Co., WI.4
George Washington Ball of Waupun, Dodge Co., WI, enlisted 16 February 1862 as a Private in the Wisconsin Light Artillery Battery and was mustered out 30 Sep 1865 at Fort Leavenworth KS.5 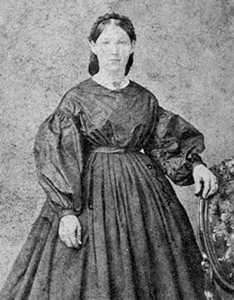 Julia Ann Ball
b. 1845 Ferrisburgh VT
d. 1924 Freeborn MN
[photo circa 1864]
Julia Ann Ball was born on 9 May 1845 at Ferrisburgh, Addison Co., VT.2 She was the daughter of John Ball and Charlotte Smith.1 Julia Ann Ball married Charles Scoville, son of Lemuel Scoville and Eleanor Rees, on 16 March 1864 at Freeborn, Freeborn Co., MN.3 Julia Ann Ball died on 20 January 1924 at Freeborn, Freeborn Co., MN, at age 78.3 She was buried on 23 January 1924 at Freeborn Cemetery, Freeborn, Freeborn Co., MN.3
From and obituary: "Julia Ann Ball was born in Ferrisberg, Vermont, May 9, 1845 and died at Freeborn, Minnesota January 20, 1924; age 78 years, 8 months and 11 days. When she was seven years old her parents moved to Wisconsin and lived near Waupun. Her mother died when she was eleven years old, after which she never had a real home. She never attended school after she was fourteen years old. When she was eighteen years old she came to Freeborn to visit her sister, Mrs. David Scoville. Here she met Mr. Charles Scoville and the were united in marriage on March 15, 1864. After their marriage Mr. Scoville was in the army for a year during which time Mrs. Scoville returned to Wisconsin to care for her grandfather who died later.

"At the close of the war they returned to Minnesota and settled on a farm two miles west of Hartland. Here they resided until 1883 when they moved to Freeborn where their home has been since that time. Eight children were born to this union; Mrs. P. H. Fisk of Freeborn, Mrs. Page Guthrie of Lewiston, Idaho, Mrs. John X. Luther of Albert Lea, Mr. C. H. Scoville of San Benito, Texas and Mrs. Ansel Gilmore of Freeborn. Mr. Scoville died in 1912 and the youngest son, Donald, in 1910. Two sons also died in infancy.

"Mrs. Scoville was one of the 'old settlers' of Freeborn County. When she first came to Freeborn she rode from Owatonna in a wagon drawn by oxen. When they were married there was no minister nearer than Albert Lea and the wedding ceremony was performed by Mr. Fred Southwick, then a justice of the peace. She joined the Congregational church of Freeborn in 1874, the first year of its organization. She was of a generous disposition and was always doing something for and thinking of others. The last few years of her life were spent in feebleness and suffering. She is survived by fifteen grandchildren and three great grandchildren. The funeral was held at the Congregational church Wednesday, Jan. 23rd, Rev. F. L. Callender preaching the sermon."3      Photo courtesy of Lin Thompson.4

Allen Ball was born circa 1847 at VT.1 He was the son of John Ball and Charlotte Smith.1
Allen Ball of Chester, Dodge Co., WI, enlisted 21 August 1862 as a rank musician in the Wisconsin 29th Infantry Regiment and was mustered out 10 March 1863.2

Noble L. Kimball was born circa 1847 at VT.2 He was the son of Lyman Kimball and Phoebe Ball.1 Noble L. Kimball married Belle Tracy on 27 January 1873 at Ferrisburgh, Addison Co., VT.3