William H. Narum was born circa 1859 at MN. He was the son of Iver O. Narum and Fanny M. Goodyear.

Clinton Manross Ball was born on 16 June 1817 at VT.2 He was the son of Isaac Ball and Sarah Manross.1 Clinton Manross Ball married Cynthia T. Dale, daughter of Jesse Dale and Mary Lamb, on 10 October 1839 at Tionesta, Venango Co., PA.3 Clinton Manross Ball died on 25 March 1893 at Fredonia, Chautauqua Co., NY, at age 75.4 He was buried at Forest Hill Cemetery, Fredonia, Chautauqua Co., NY.5
Comment by DGB: some researchers have a daughter Annie M., supposedly born in June 1849, who married an Edward D. Howard. However, there is no census evidence for Clinton Ball that suggests he had such a daughter, plus there were only seven months between the birth dates of Electi and Annie. End of comment. From an obituary (Fredonia NY): Clinton M. Ball died suddenly of apoplexy yesterday afternoon, aged 77 years. The desceased was in his usual good health and spirits five minutes before his death. He had driven down [the] street three times during the day and met and talked with men upon business. Upon his return...he went out into his grounds to direct some workmen. When he reached them he sat down upon a pile of lumber, and spoke the name of one of the men who noticed that he acted strangely and sprang towards him and caught him as he fell back dead. He leaves a widow and six children: Mrs. E. D. Howard, Linwood Avenue, Buffalo; Mrs. J. B. Alden, Jamestown; J. C. Ball, Busti; Mrs. Frederick Harris, Fredonia; Mrs. D. A. Bartlett, Sistersville, West Virginia; F. P. Ball, Fredonia. He is survived also by one brother and three sisters: Mrs. J. Y. Siggins, Pleasantville, Pa; Mrs. William Richardson, sheridan, N.Y; Mrs. Aldelia Gillson, Fredonia.
Mr. Ball was born June 16, 1817 in Genesee County, east of Batavia. His father, Isaac Ball, removed with his family to Hickory, Forest County, Pa., when the subject of this sketch was six years old. When he reached manhood he went ot Pithole and engaged in lumbering. On October 10, 1839 he married Miss Cynthia T. Dale, daughter of Jesse Dale of Tionesta. He bough a large tract of land which proved to be in the center of the Pithole oil field. He sold it for a large amount in 1865 and came to Fredonia and bought the Wheelock place on East Main Street and made that his home. This comprised a large and handsome dwelling and about 100 acres of land, which is now mostly in grapes and other fruit.
Since coming to Fredonia he had engaged extensively in the real estate business here and in neighboring towns. He bought several very fine farms and among his other purchases was the Johnson House, which formerly occupied the site of the new Columbian Hotel. He afterwards sold this to the Taylor Brothers. He built one half of the American Block, which he still owned at the time of his death. he also continued as an operator in what is known as the Lower Oil Field. He gave liberally to the churches wherever he lived. When the Methodist Church in Fredonia was built, he contributed $3,000 or more and furnished most of the money for building the church of the United Brethren on Clinton Avenue. He was a member of this church. He spent considerable money in improving Clinton Avenue, which he was very anxious to see extended to Dunkirk. He was likewise one of the early promoters of the Dunkirk and Fredonia street railway. He was a good man in every respect, being one of the best of husbands and fathers and a highly esteemed citizen.4

Sarah Ball was born on 12 February 1820 at Hickory, Forest Co., PA.2,3 She was the daughter of Isaac Ball and Sarah Manross.4 Sarah Ball married James Young Siggins, son of George Siggins and Jane Young, on 20 December 1840 at Balltown, Forest Co., PA.2 Sarah Ball died on 15 September 1907 at Pleasantville, Venango Co., PA, at age 87.2 She was buried at Fairview Cemetery, Pleasantville, Venango Co., PA.3
As of circa 1841,her married name was Siggins.

Child of David Ball and Mehitable A. Richardson

Nelson Green Ball was born on 28 April 1827 at Balltown, Forest Co., PA.2 He was the son of Isaac Ball and Sarah Manross.1 Nelson Green Ball married Martha I. Hunter, daughter of William P. Hunter and Sally Range, on 10 January 1849 at Venango Co., PA.2 Nelson Green Ball died on 14 October 1890 at Pithole City, Venango Co., PA, at age 63.3 He was buried at Riverside East Hickory Cemetery, East Hickory, Forest Co., PA.3
From an obituary: Nelson Ball was born in East Hickory, Forest County, Pa., and died at the age of 63 years, 5 months and 16 days. He was one of the old landmarks of Forest County. He was the son of Isaac and Sally Manross Ball. When he arrived at the age of maturity he entered into a co-partnership with his father in 1848 and built grist mill at East Hickory. In the year 1860 he bought his father's interest in the mill and also portions of the farm containing the buildings, etc.. In the year 1863 he bought his father's interest in the mill and also that portion of the farm containing the buildings, etc. After the death of his father he bought the remaider of the farm lying on the east side of Hickory Creek. In 1885 he sold the grist mill and farm to Thomas Jefferson Bowman and removed to Bear Lake, Pa. A few years later he bought the Clinton Ball farm in Pithole, which was once the famous oil farm in Pithole's palmiest days, where he resided to his demise. He was engaged in farming and lumbering in his early life and was always succesful in his many business enterprises. By his social intercourse and aimable disposition he drew about him hosts of friends wherever he went.
He was married to Martha I. Hunter, a daughter of the late William P. Hunter of Tionesta. To them five sons and three daughters were born, namely: John Wesley, Isaac Homer, Austin Fletcher, (murdered at Louisville, Kentucky)Clifford and William Napolean, Mrs. Sally Gorman; Jenny, now Mrs. Zahnizer and Aurilla, the youngest daughter. Mr. and Mrs. Ball were members of the Free Methodist Church, where they were endowed with many spiritual blessings and he built up in the most holy faith. For many years they were members of the Methodist Church till about ten years ago when they united with the F.M. Church. Mr. Ball had been a sufferer from kidney disease for nearly twelve years making life for him almost a burden, yet he was ever cheerful.3

Children of Nelson Green Ball and Martha I. Hunter

Emily Ball was born circa 1828 at PA.2 She was the daughter of Isaac Ball and Sarah Manross.1 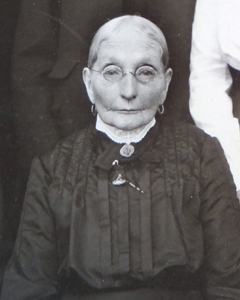 Children of Martha I. Hunter and Nelson Green Ball